‘iZombie’ Rumors, Plot and Latest News: Is This Another ‘Walking Dead’ In The Making? I Don’t Think So! Coming Soon in CWTV

The CW Television Network will have a new show coming soon called iZombie.

On the CW TV site, the story focuses on Olivia “Liv” Moore who has been turned into a zombie. Despite being an “undead”, she still has some control over her need to feast on the brains of living. In order to avoid being detected, she made other people believe that she has a “Gothic” look despite her very pale complexion and her whitish hair.

Unable to control her urgings to eat human brains, Liv got a job working in a Coroner’s office in Seattle. In the morgue, Liv can feast on numerous brains of human corpses coming in every day. But her boss, Dr. Ravi Chakrabarti eventually found out who she really is. But the doctor decided not to turn her in.

Liz discovered that by eating the corpse’s brains, she can relive some of their memories. Since most of the unidentified corpses are murder and homicide victims, she can at least “remember” how and who killed them. She helps Clive Babineaux – a homicide detective, investigate and solve the murder of many of those lying in the morgue. She simply pretends that she is a psychic to help explain how she knows the intimate details of the case. END_OF_DOCUMENT_TOKEN_TO_BE_REPLACED

Walking Dead Season 5 Spoilers, Trailer, Premiere, Characters, Plot And Latest News: Could Daryl Be Hinting Of A Bloody Fate That Awaits Him Or Could It Be Rick’s

We have the latest for you on the spoilers, trailer, premiere, characters, plot and latest news of the Walking Dead season 5. Set to premiere this October 12th, the Walking Dead season 5 will see Rick Grimes and his people having to encounter survivors of Terminus. Though details about the new season are scarce, producers have promised fans that if they are looking forward to this new season, they have a lot in store for them for it has some crazy plot points that will have them edged to their seats.

A sequence of photos, uploaded on a tweet feed posted by Norman Reedus who plays the role of Daryl, reveal or give a hint of what is to be expected in the season. In one of the photos, Reedus can be seen with make-up artist and producer, Greg Nicotero in one of the take scenes.

In the photos tweeted, all show Reedus hands in some sort of bloody effect which is a hint. Going back to the comic series one can understand the hint as it’s similar to Rick Grimes’s first encounter with the governor which in turn had him have one of his hands chopped off. Seeing as how things turned out, it seems that one of the characters might suffer the same fate as Rick, an amputation but according to the tweets it looks like it is Daryl’s fate. But maybe it’s just Reedus playing around with the minds of the fans as the last tweeted picture depicts a ringed finger. END_OF_DOCUMENT_TOKEN_TO_BE_REPLACED

To some invasion of privacy is as worrisome as the pending zombie apocalypse. A class action lawsuit has been filed against AMC for allegedly sharing its website’s users viewing habits with Facebook without permission.

Ethel Austin-Spearman is one ticked off The Walking Dead fan. Since 2013, Spearman has been visiting AMC’s website to watch video clips of the hit zombie show. Unbeknownst to her, every time she stayed logged in on her Facebook account and watched a clip, AMC would share that information with Facebook. AMC transmits the user’s Facebook identification as well as the title of the video viewed by the individual. This is not just for The Walking Dad but for any other video on AMC’s website. Facebook can use that information for any purpose including creating targeted advertisements based upon the user’s viewing habits. For example, if Facebook knows that Spearman is spending time watching clips of The Walking Dead it may show her an advertisement for a website that sells zombie merchandise.

Spearman filed a class action lawsuit on behalf of herself and similar situated AMC website users for violation of the Video Privacy Protection Act which prohibits the disclosure of video viewing records without a person’s express written consent. She seeks damages of $2,500 per violation which could be an astronomical numbers based on the number of Facebook users that have had their information shared.

Telltale Games announced earlier this year The Walking Dead seasons 1 and 2 would be making their way to the PlayStation 4, Xbox One and a boxed retail version for Xbox 360, PlayStation 3 and PlayStation Vita owners. Today, Telltale has announced these versions of its critically-acclaimed series will become available starting in October.

The Walking Dead will be making its debut on current-gen systems in digital form as well for those of you who prefer to download as much of their gaming content on their hard drives. Retail disc versions of The Walking Dead will come in two separate packages for each season, with the first season including the 400 Days DLC.

As for last-gen, the first season of The Walking Dead is already available at retail, so today’s announcement will just be bringing the second season to store shelves.

If you haven’t played either season of The Walking Dead, or have a friend who hasn’t, then this would your best option this holiday season in order to experience both seasons all in one shot. Trust us when we say you won’t be sorry. 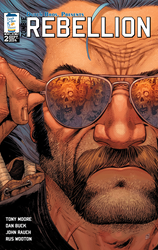 Brant Boersma, Dutch Bros. Director of Culture, has been a fan of Tony’s work for quite some time. When the opportunity to meet Tony came up, Brant jumped. They met for coffee, and through a shared love of comics they immediately became friends.

“We are super stoked to have Tony on board for the Dutch Bros. Rebellion,” said Brant with his infectious humor. “It’s great to work with him. He is so handsome and brilliant with a pencil.”

The Dutch Bros. Rebellion: Further Adventures of Rebel Man is a short, full-color comic. Written by Dan Buck, penciled and inked by Tony Moore and colored by John Rauch. It follows Issue 1, Dutch Bros. Zombie Rebellion, which was black and white drawn by Jeff Wester and written by industry star Nathan Edmonson. END_OF_DOCUMENT_TOKEN_TO_BE_REPLACED